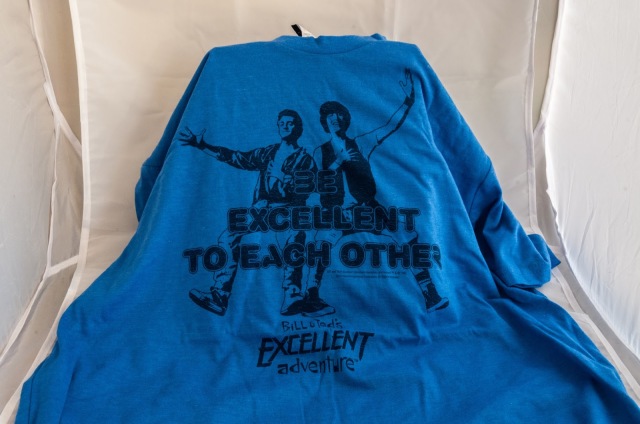 First item from the box is a Bill and Ted t-shirt. I was hoping for the Wyld Stallyns logo but this design is also great. “Be excellent to each other” is one of the more memorable quotes from the movie. Party on dudes!

The next items are from the Back to the Future trilogy. Fans are gearing up for “Back to the Future Day” which falls on October 21, 2015, the day Marty makes the jump into the future. We don’t have flying cars and hoverboards but we do have some cool stuff in this box. The Doc Brown Funko Pop figure is the “past” version from the 1950’s. I believe Funko released another Dr. Brown figure which depicts him in the white jumpsuit from the first movie. The other item from Back to the Future is a replica Hoverboard. It’s not the same as a real Hoverboard but it still looks cool. I have a bunch of stuff to add to my desk this month!

Also included in this month’s crate is a Sonic Spork! The handle is modeled after the famous sonic screwdriver. I was hoping it would at least light up but it doesn’t. I will probably bring this to work as my back up utensil. 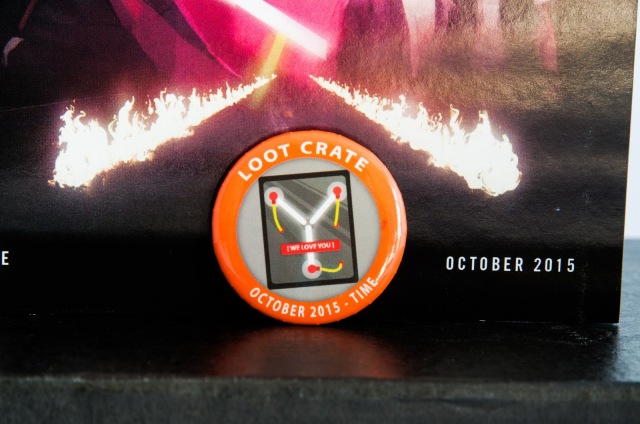 The button design for this month is the Flux Capacitor from Back to the Futrure series. It also has the words “we love you” which Loot Crate uses in their email.

Two of my favorite things from Loot Crate have been exclusive Funko Pop vinyls and nerdy t-shirts. My favorite items from this month were the Bill and Ted t-shirt and the the Doc Brown Funko. The Sonic Spork is cool but I wish it was more unique. The hoverborad replica was alright. I’m not sure if it will find a spot on my desk. Overall, I think this crate was worth it.

If you want to sign up use this LINK, also use the promo code SAVE3 for $3 off any subscription. I also get credit towards more Loot Crates if you use the link. If you have any questions, leave a comment at the bottom.