Here is the Paris leg of our honeymoon. We had an amazing time. Like the London video, I used my GoPro Hero 3 and a Feiyu Tech Gimbal. Thanks for watching.

We narrowed the list of cell service providers to SFR and Orange.  After reading many reviews and talking to a few locals. SFR and Orange were the best providers. We went with Orange since it was the closest store to our apartment. We payed €40 each. It was more expensive than a London SIM but it was slightly cheaper than a pocket WiFi. The service was great and we didn’t lose signal while in Paris. We made use of the data and talk time by calling each other when we ventured off on our own. I would recommend them if you need cell service in Paris.

We arrived at Gare du Nord and was planning on calling an Uber for transport to the apartment. I wasn’t able to get service so we decided to find a taxi service. Here, is where I screwed up. You should always go with an official taxi to avoid getting ripped off. We went with an unmarked cab and it costed us €75! The fare should have been about half that. It was an expensive lesson but I’ll be more cautious next time.

While in the city we purchased five day passes for public transportation. The total cost for zones 1-3 was about €40. This was a great deal since we spent a lot more than that in London. It came with unlimited use of both bus and metro.  We also used Uber for a few late night commutes, which were great. We also used Uber to get to the Orly airport which was about $40.

We used Air BnB and stayed in the 4th arrondissement. It was a small apartment but it had everything we needed. It was close to a lot of different attractions.  The Lourve, Notre Dame, Musee d’Orsay and Sainte Chapelle were about one to two stop on the metro or bus. 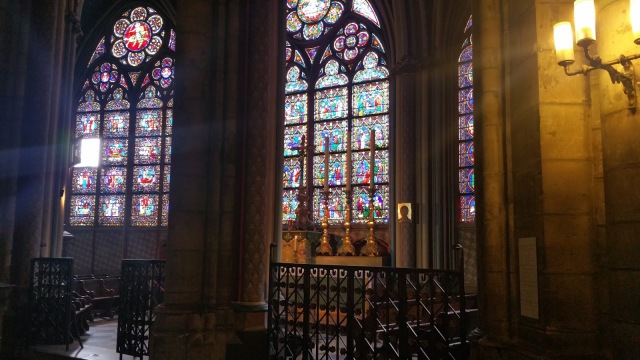 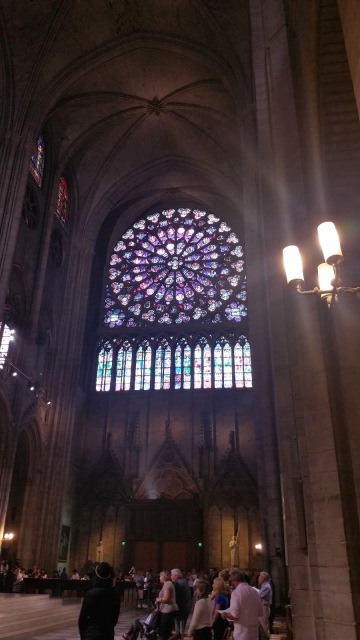 Notre Dame is one of the churches that I have always wanted to visit. It’s pictured in many movies especially in the Disney classic, The Hunchback of Notre Dam. After visiting churches in London I was eager to see the churches in Paris. We were able to attend Sunday mass at this cathedral and it was beautiful. The choir was amazing and even though we didn’t understand French we felt the presence of God. 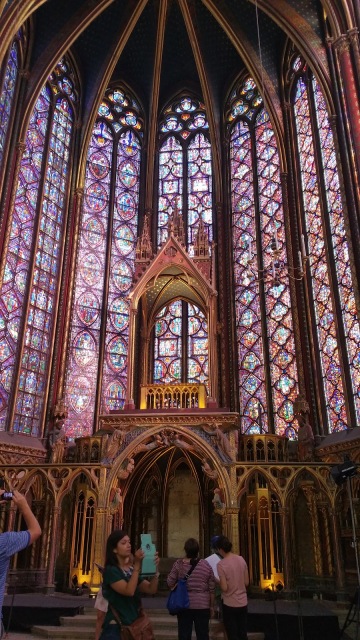 Not far from the Notre Dame Cathedral is the Sainte-Chapelle chapel. It is a small one room chapel but it has beautiful stained glass windows. Information detailing the restoration of the chapel is also on display

The Louvre is one of the worlds most famous museums. Within it’s three wings it houses priceless art pieces. The Mona Lisa, Venus de Milo and the winged victory are on display as well as other famous works. The Louvre is was on my bucket list and I couldn’t wait to explore.

Musee d’Orsay
I didn’t know about the museum but it’s just as famous as the Louvre. I saw very famous works by Monet and Van Gogh which I have only seen in text books. 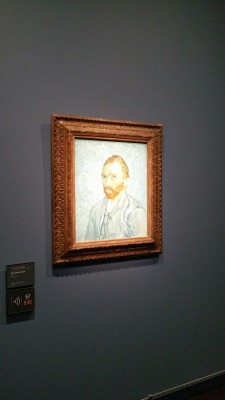 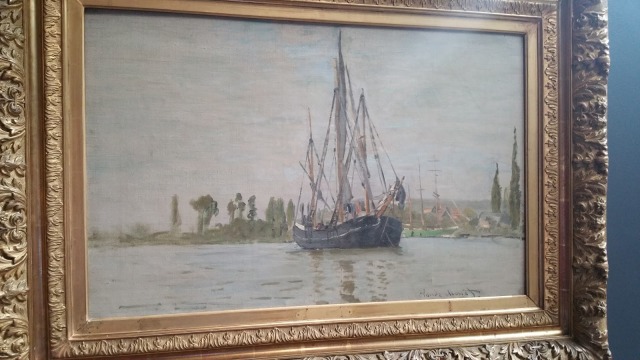 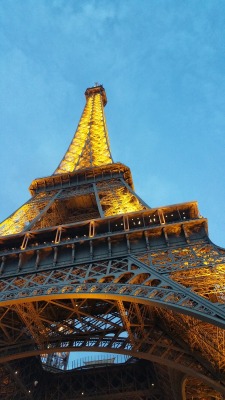 I was able to see the Eiffel Tower during the day and night. They had an awesome light show at night.

The Arc de Triomphe is another iconic Paris building that I’ve seen in many movies. It’s has a great view of the city.
CrossFit Lourve and Starplayer
As with every stop on the city tour we had to stop by a box and game store. We stopped by CrossFit Louvre which was under a Reebok store. The gym was a good size but not too big. They were out of shirts which was a bummer. 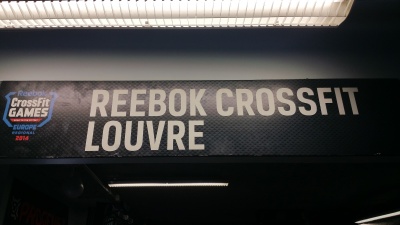 Paris was amazing but we should have stayed for a shorter time. Five days was too long, since we saw all the things we wanted in three days. We still had a great time and would love to visit again.

September has been a great month. I got married and went on an awesome honeymoon to Europe. We visited four cities: London, Paris, Rome and Amsterdam. I brought my GoPro with me and took a few shots using my new Feiyu Tech G4S Stabilizer. It worked really well and I hope the video comes out great. I posted a lot more pictures on my Instagram (@ENPalomo) if you want to see some stills.
After reading a lot of posts about pick pocketing in Europe, my wife bought a Pacsafe Venturesafe 150 GII cross body pack. I used this instead of a body wallet that people usually recommend. This worked great on the subways and buses throughout Europe. It has a lot of anti theft features which makes it a great alternative to a body wallet. I might do a review on this after all the cities.

We purchased SIM cards in London, Paris and Rome. We did not purchase SIM cards in Amsterdam, instead we used our previous SIM cards and roamed. This lasted about three days into our trip to Amsterdam which was enough.

I booked my tickets using Kayak and my train ticket using Eurostar. Each city has a different system for public transportation which we picked up after landing. We also used Uber for a few rides in London and Paris. This was the first time using Uber and it took a few rides to get used to using it and the etiquette when using it. The app didn’t update numbers when switching SIM cards which I found out the hard way. Overall, I had a great experience with Uber and the drivers I interacted with.If you plan on using taxis to get to your accommodation, use a legitimate one. Their will be people asking you if you need a taxi in the airport terminals and some of them are not legitimate. Make sure they have a meter and a taxi sign or licence. They prey on tourists and will overcharge you.

Another great app to download would be City Mapper. This app was a lifesaver on the trip. It requires an internet connection but you can use it offline if you save routes. You pick a starting point or use your GPS location and pick a destination. The app then calculates the quickest route to your destination including all forms of public transportation. It also calculates driving, walking and rider sharing apps like Uber. This made navigating the city that much easier. It doesn’t have all major cities so check the website to see if the one you’re visiting is on there.

Trying to find hotels that fit within our budget and proximity to the city center was extremely difficult. We opted to go with AirBnB. This was my first experience using AirBnB and it was great. It was also more affordable and located in great areas within the cities. At first I was hesitant to use this site but after talking to multiple friends we decided to give it a try. Each place we stayed in had an excellent guest ratings and had a minimum 50 reviews. I also read all the negative reviews if any. We had a great time in each place which I’ll discuss in each city review.
Attractions and Restaurants
We primarily used the website Trip Advisor to look up attractions and restaurants. I’ve used this website to plan past trips to Tokyo and Seoul. They have a great forum if you need to ask questions about places you’re going to visit. I would also save locations using Google maps. I will talk about the few we visited on our trip.
Money Exchange
We took some cash with us with the intent to change it at a currency exchange. In retrospect, it wasn’t the best way to obtain foreign currency. We should have brought half the amount of cash and pulled the rest out of ATM’s. When I added up the fees from the ATM transaction, it was lower than the fees from currency exchange. Most European bank ATM’s do not charge fees, with most of our fees coming from our local bank. Our bank fee was about $2. Try to avoid independent ATM’s and stick with bank ATM’s.

Some currency exchanges have commissions and the trading rate was higher than the bank rate. Make sure you inform your bank before traveling. Most banks will lock your account since withdrawals from a foreign country looks suspicious.

My wife and I have a travel friendly credit card. We do not get charge foreign transaction fees and we get the best dollar to euro/pound conversion rate as opposed to cash. The rates are made by Visa which is close to the bank currency exchange rate.

I will be writing about the cities in the order I visited them, London, Paris, Rome and Amsterdam. I’ll try to finish one each week.
Lift Heavy and Level Up!